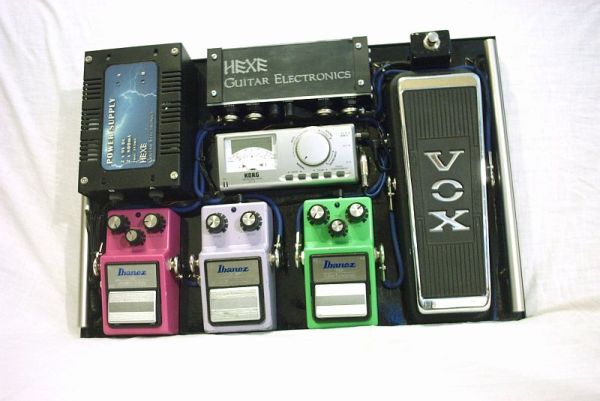 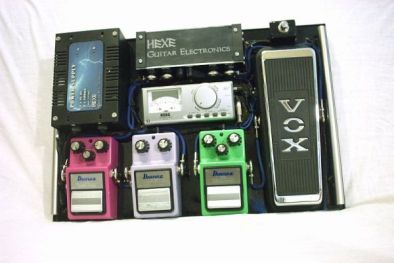 Pedals are plugged into the two amps: Marshall 1987X and Fender Pro Reverb Silverface with a Lehle switching unit

Custom built Power supply is used to power all the pedals. PSU delivers two separate 9VDC @ 800mA power outputs. Out A powers the pedals placed before the preamps (Wah, TS9), out B powers the pedals used in Marshalls effect loop (CS9, AD9).

TS9, CS9, AD9 and the Vox wah were modified by installing the TrueBypass modules. Originnaly not present power jack was installed in The Vox wah.

Guitar signal is fed into the high input impedance buffer placed at the input of the pedalboard. The buffer guarantees no high band loses due to cable capacitance and multiple jack connections. Apart from the impedance converting the buffer splits the signal in two paths. One is used as a main path, the second is used as a source for Tuner. That means, the tuner has its own separate signal path and there is no influence on the sound. Additional footswich is placed just above the Wah. It's function is to mute the main output and send the signal to the Tuner. The switch turns on also the tuner's backlight. The Buffer and all the jack sockets are placed in small box on the top of the pedalboard.

Step 4 - planning and assembling the pedalboard.

Pedals and other devices are placed in an intuitive way, ensuring the minimum of the interferences. The power supply is situated as far as possible from wah, all connections are made with shielded microphone wire. The most heavy devices like PS and wah are mounted to the plate with screws. 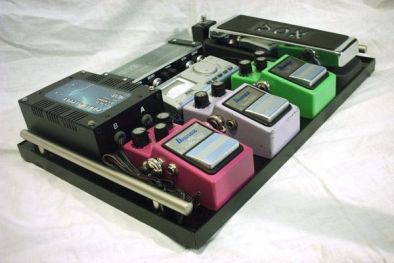 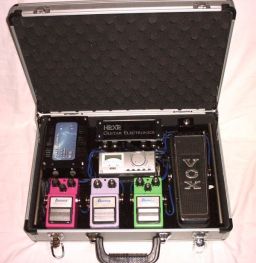 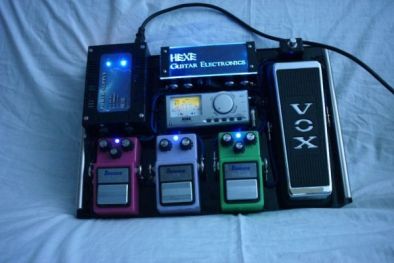