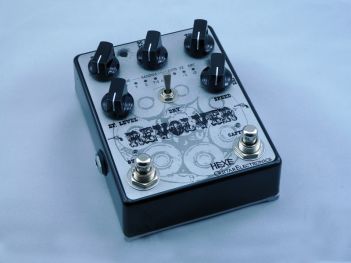 The initial idea for the reVOLVER pedal, a device that can mimic a typical CD stuttering effect, rhythmic repetition of a small chunk of audio signal quickly evolved into a much more advanced granular type sonic texture generator which can drastically extend the range of instrument's sounds, especially if you are into more experimental types of music.

Basic operation of the pedal is pretty straightforward. It records up to 1 second of audio material, keeps it in an infinite loop (basic stutter effect), changes the play speed (like in tape reel machines), reverse sthe play direction. Ontop of that there is a set of randomized modes, which use an internal random value generator to change the parameters each time you capture a new sample and an auto self retriggering mode in which the pedal captures the samples automatically.

One of the most interactive features is the sample TIME control. The knob sets the maximal sample buffer length only. The actual sample length is controlled by the time the CAPTURE footswitch is held down. That means, even if the TIME setting is set to max (1 second) you can still record shorter samples just by releasing the CAPTURE footswitch before the max available buffer time is up.

There are 8 available working modes. Except in the 1st one ("Glitch!"), used for an instant momentary type stutter effect, the sample capturing mechanism works as follows:

The working modes are grupped into four main sections:

Each of the 8 working modes operates as follows:

In modes, where the pitch shift range is quite wide (-1...+1oct and -2...+2oct) the SPEED knob or plugged expression pedal has a dead zone around the center position. This helps with easy jumping into the normal pitch while playing. 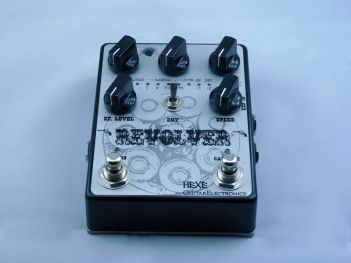 Version I of the pedal, many features are still present in the version II.